Using consumer drones for geospatial mapping is a skill set readily available to any competent drone pilot. Drone mapping Mount Coot-tha Quarry in Brisbane was one of the first mapping projects we undertook. At DroneAce, we have been trailing the consumer grade DJI MavicPro as a viable drone mapping platforms and set out to ascertain the quality of images acquired and how accurate autonomous flight control apps are at capturing an image sequence for later use in photogrammetry software. This was one of the first autonomous drone mapping missions undertaken having trailed a number of flight control apps with the MavicPro on small open fields with a variety of results.

In this instance we used DroneDeploy as the autonomous control app and made the mistake of having the camera control in DroneDeploy set to automatic which resulted in overexposed images. However DroneDeploy was able to successfully captured 224 jpg images over a 7 minute period covering an area of 16 hectares. This was with the drone flying at15m/s at 70M AGL, with 60% Sidelap and 70% Frontlap. A similar drone mapping project was undertaken at the White Hill Quarry in Brisbane.

To create accurate survey grade results with a consumer drone, it is necessary to employ ground control points (GCP) throughout the target area to be mapped. As the aim of this mapping project was to gain experience in controlling the drone via DroneDeploy and not survey grade accuracy, no GCP were used.

Using Google Maps, the nearby Mount Coot-tha quarry was located that was suitable for drone mapping. Using the Google Maps 3D navigation feature, we where able to locate a suitable launch and landing site as well as identify
alternative landing sites should the primary site be compromised.

A useful feature of Google Earth Pro (now free) for the drone pilot / drone mapper is it’s ability to use splines to calculate terrain
gradients.

Use Google Maps to identify a quarry for drone mapping 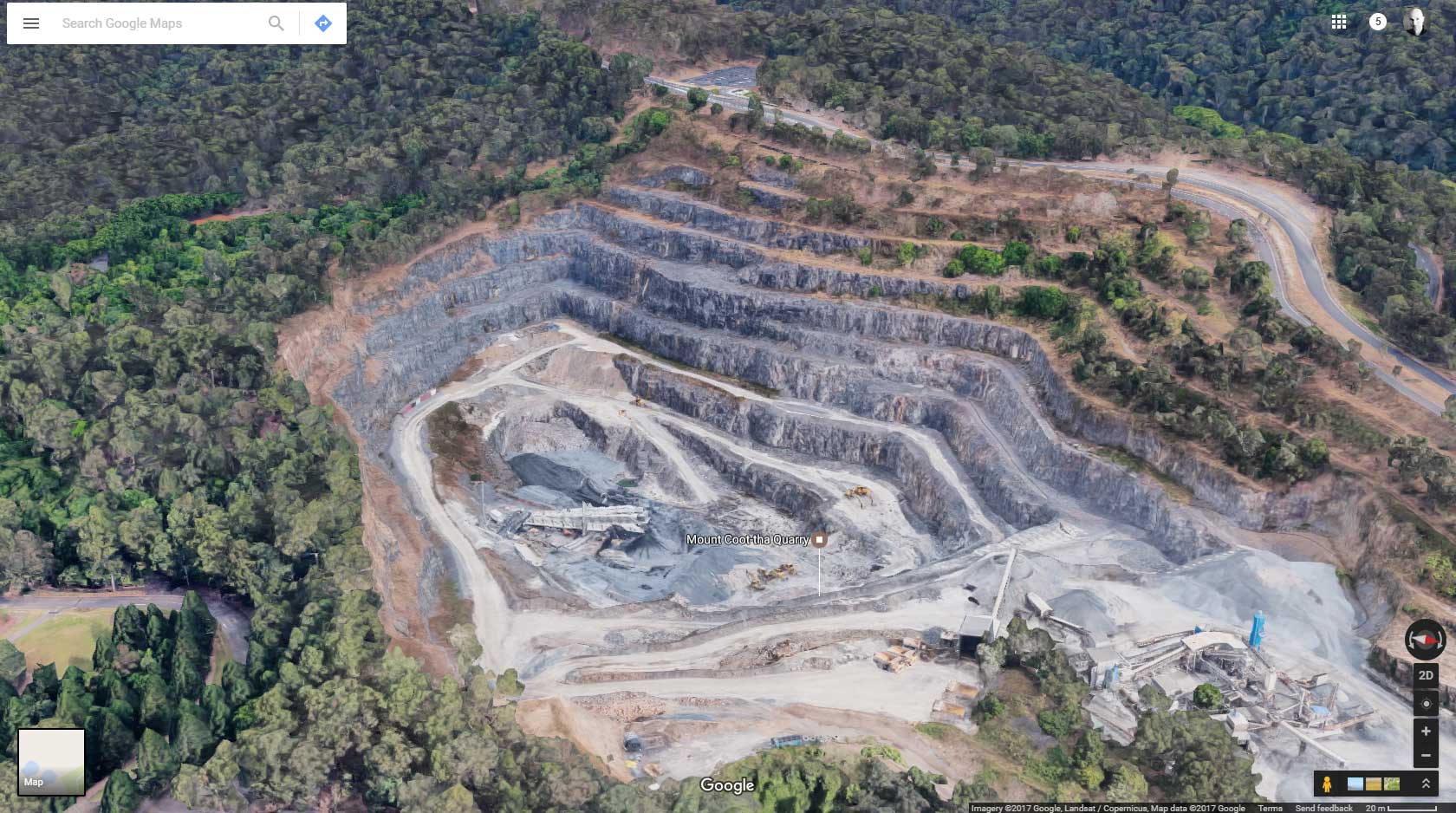 Use Google Earth Pro to visualise the terrain slope 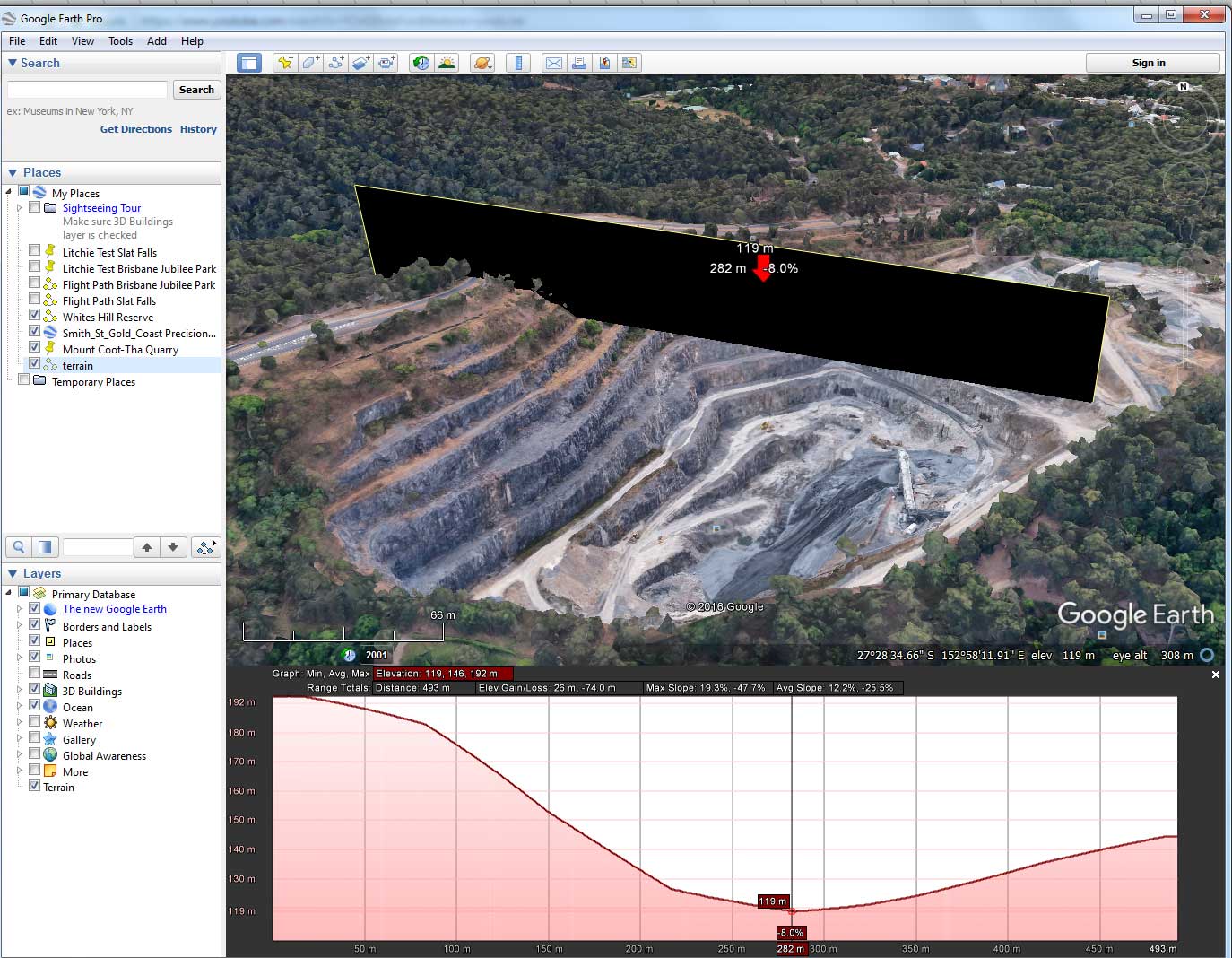 DroneDeploy was used as the autonomous flight control app on an Ipad connected to the MavicPro hand controller. As mentioned, we left the camera setting on automatic in DroneDeploy which resulted in over exposed images. It is recommended to keep the camera setting in manual and adjust them prior to flight when capturing images via Drone Deploy and it is preferable to have slightly underexposed than overexposed images. In this case we trialled using the camera on automatic and all images captured were properly focused.

DroneDeploy’s off line flight planning option was using on a desktop computer accessed via the web. The interface is simple and intuitive and creating and saving a mission is relatively fast and involved drawing a spline around the target areas and adjusting the flight parameters to suit. This includes changing the height, front lap, side lap etc. By changing these parameters, the corresponding ground sampling distance, (the resulting resolution of the drone mapping mission) is displayed. 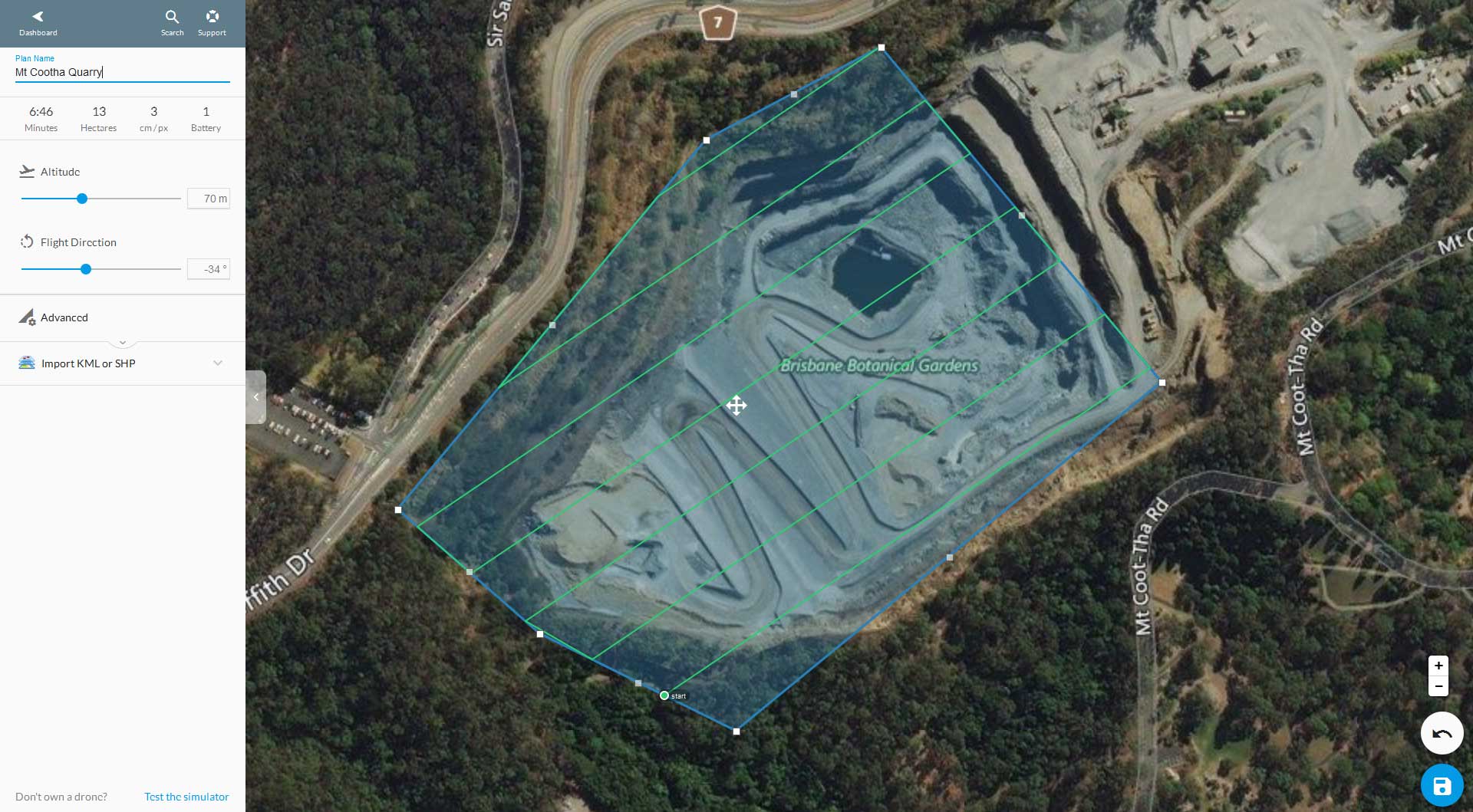 At the quarry, DroneDeploy was launched, the pre-saved mission loaded and the MavicPro flew the designated mapping mission. It is critical to do pre-flight, in-flight, and post-flight checklists. In flight checklists include constantly monitoring the telemetry on the drone console and IPad, especially the drone and hand controller battery life and the GPS signal strength.

It is also important to maintain situational awareness at all times, this includes listening and watching out for manned aircraft in the sky as well as being aware of what is happening in the immediate surrounds.

Once an overlapping sequence has been acquired from a UAV using drone mapping, the next phase is to use photogrammetry software to convert the aerial images into 2D and 3D data. Using Agisoft Photoscan, the drone mapping images were processed into various data formaes including a point cloud, an orthomosaic, a digital surface model (DSM) and a 3D mesh file. This data can provide useful decision making information and be used in 3D visualizations and presentations. 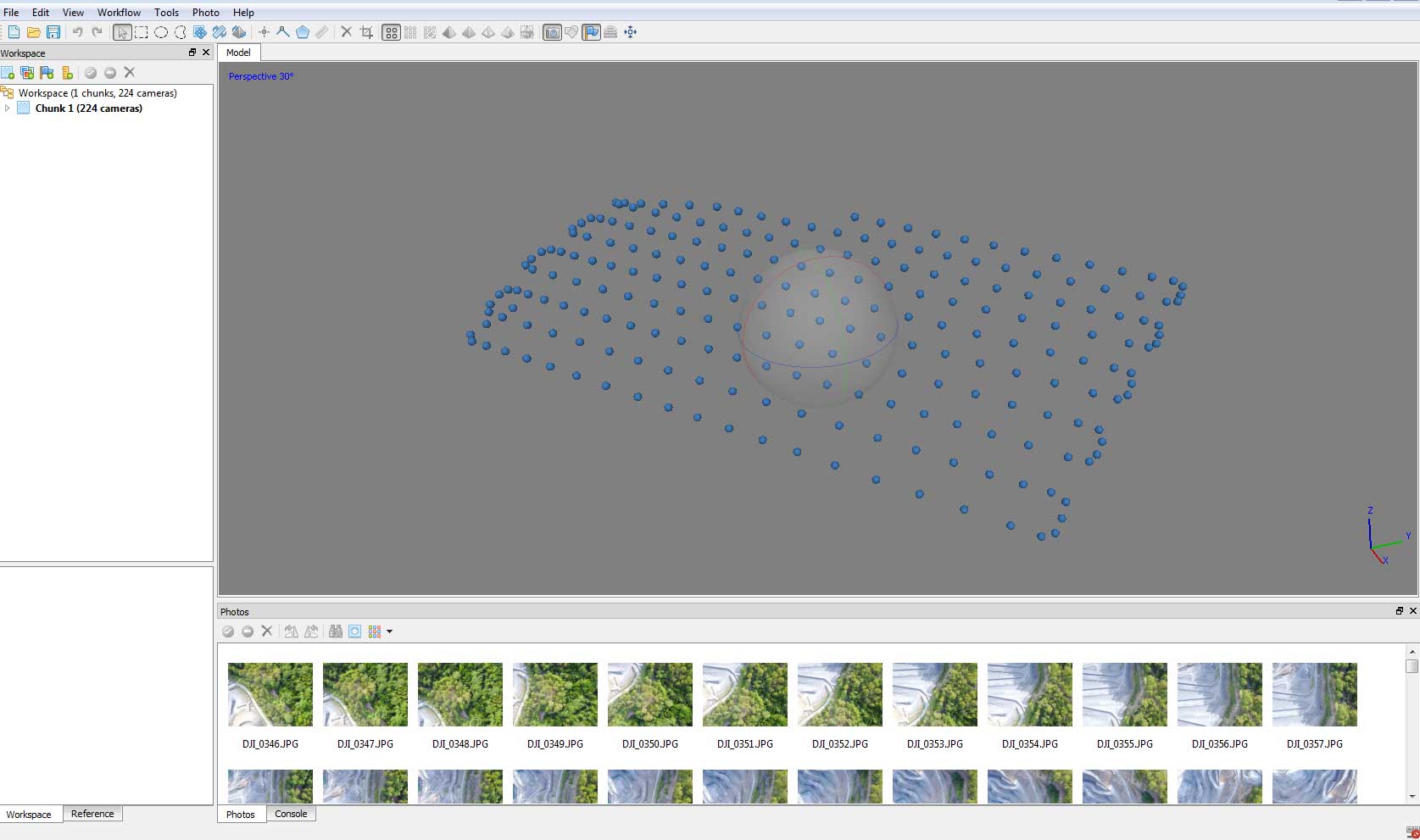 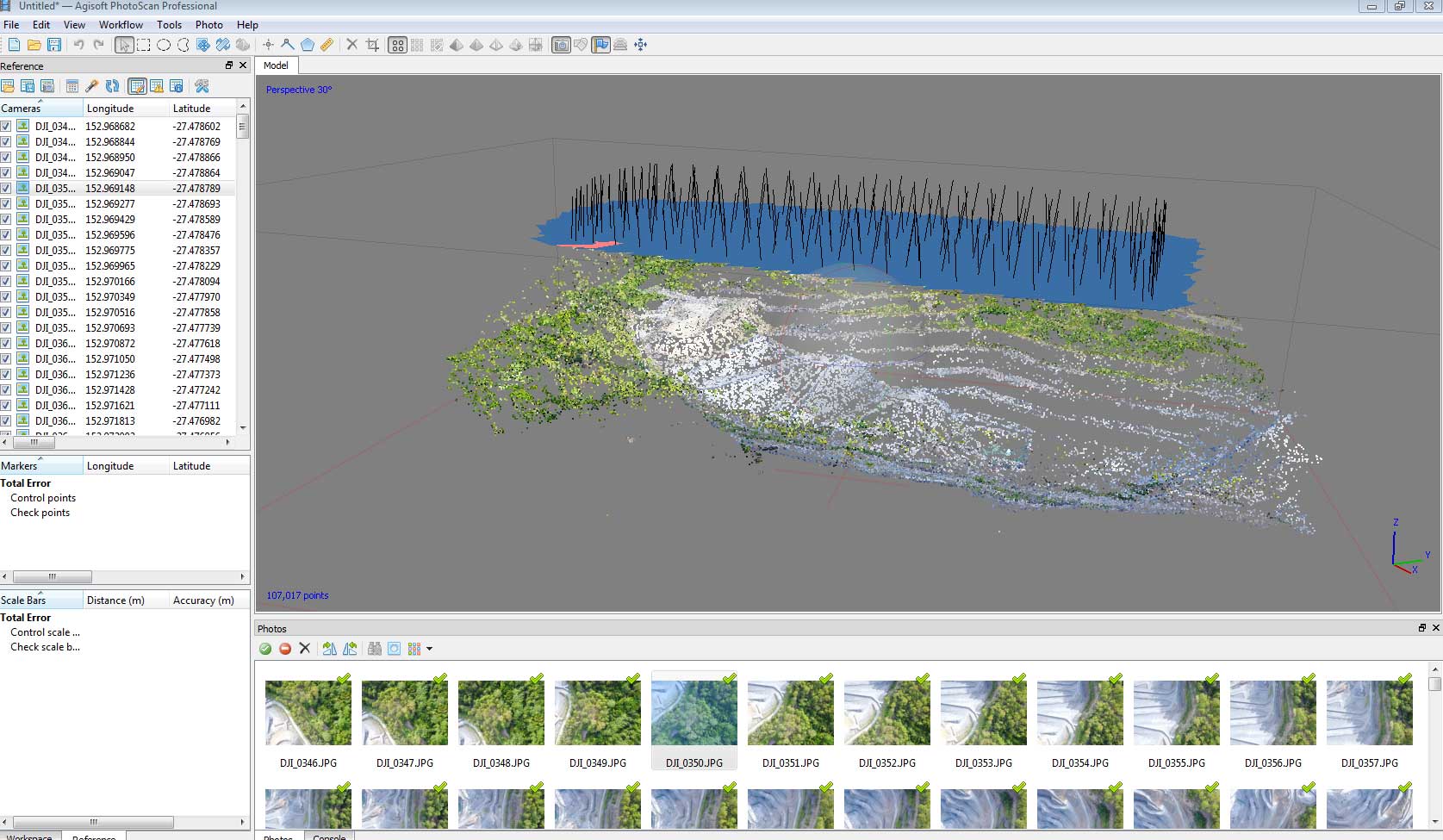 A close up of the point cloud in Agisoft 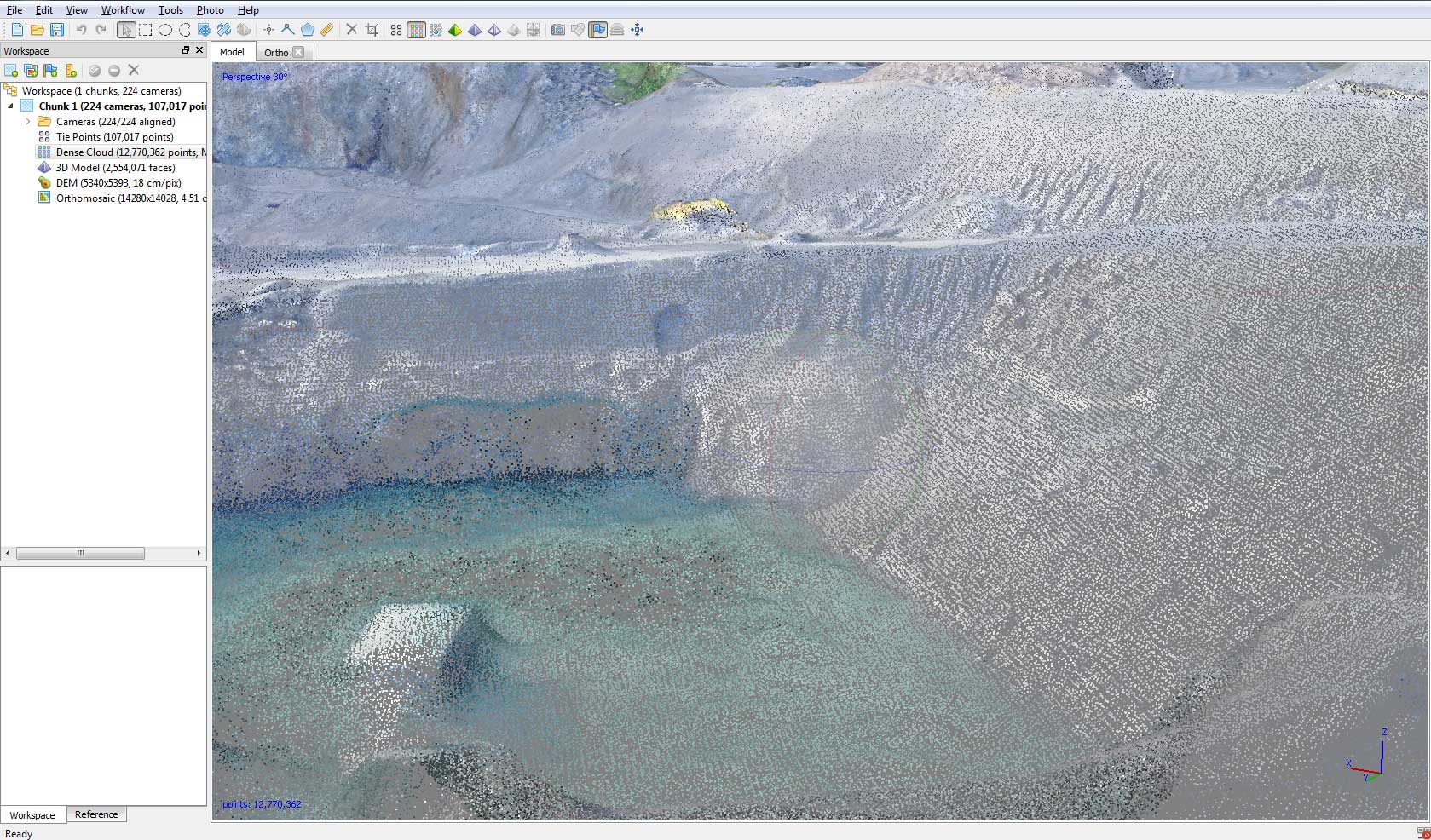 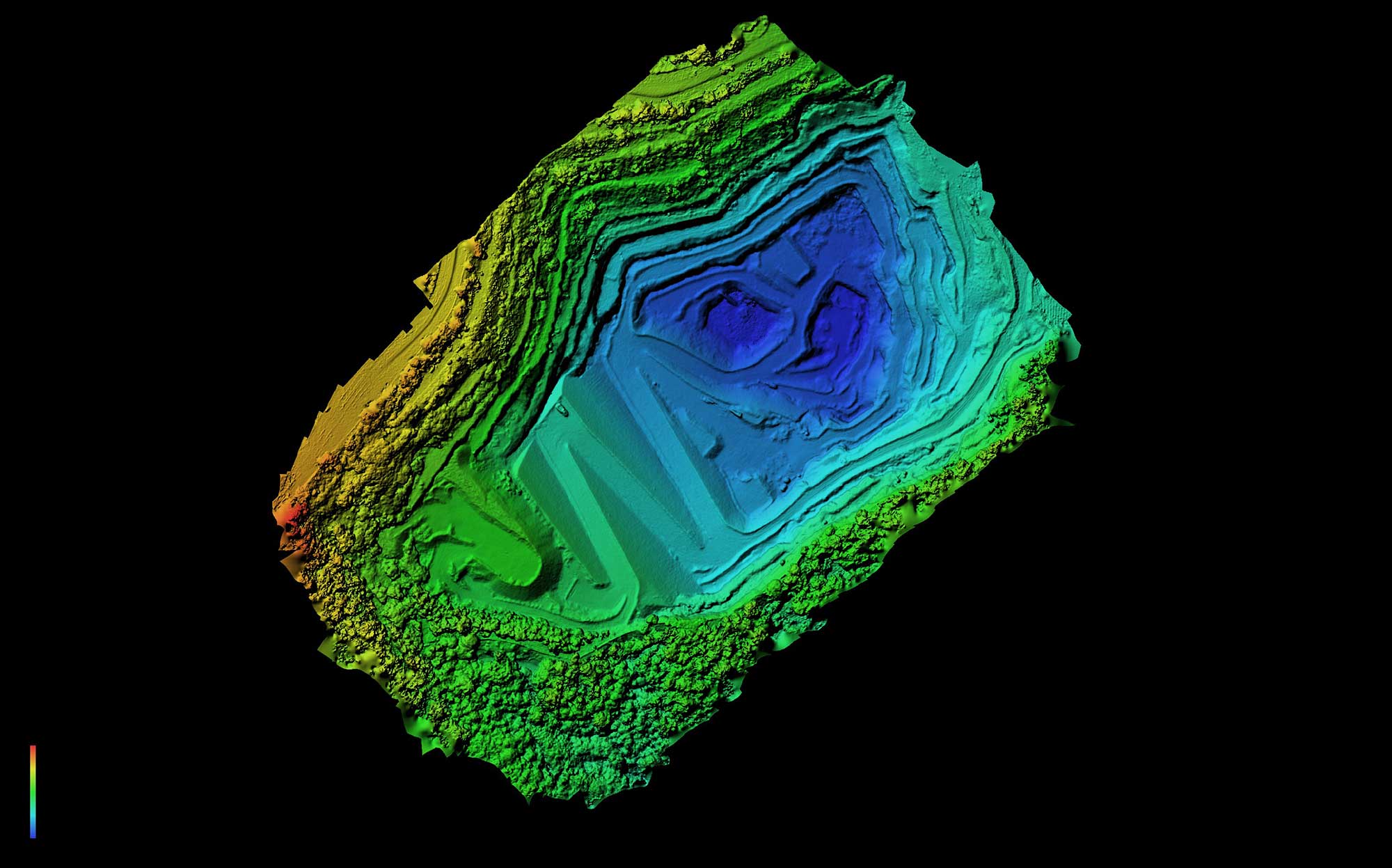 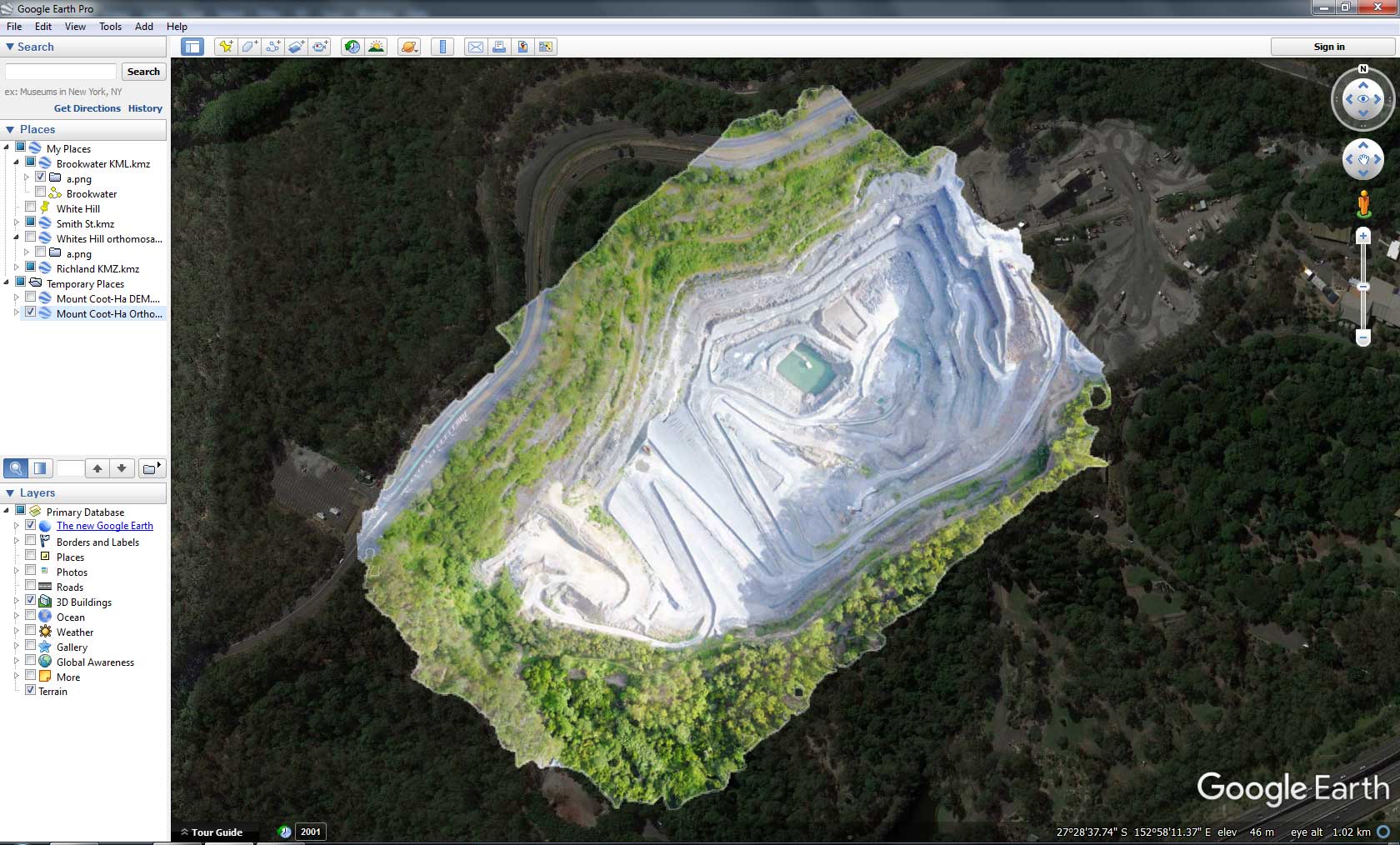 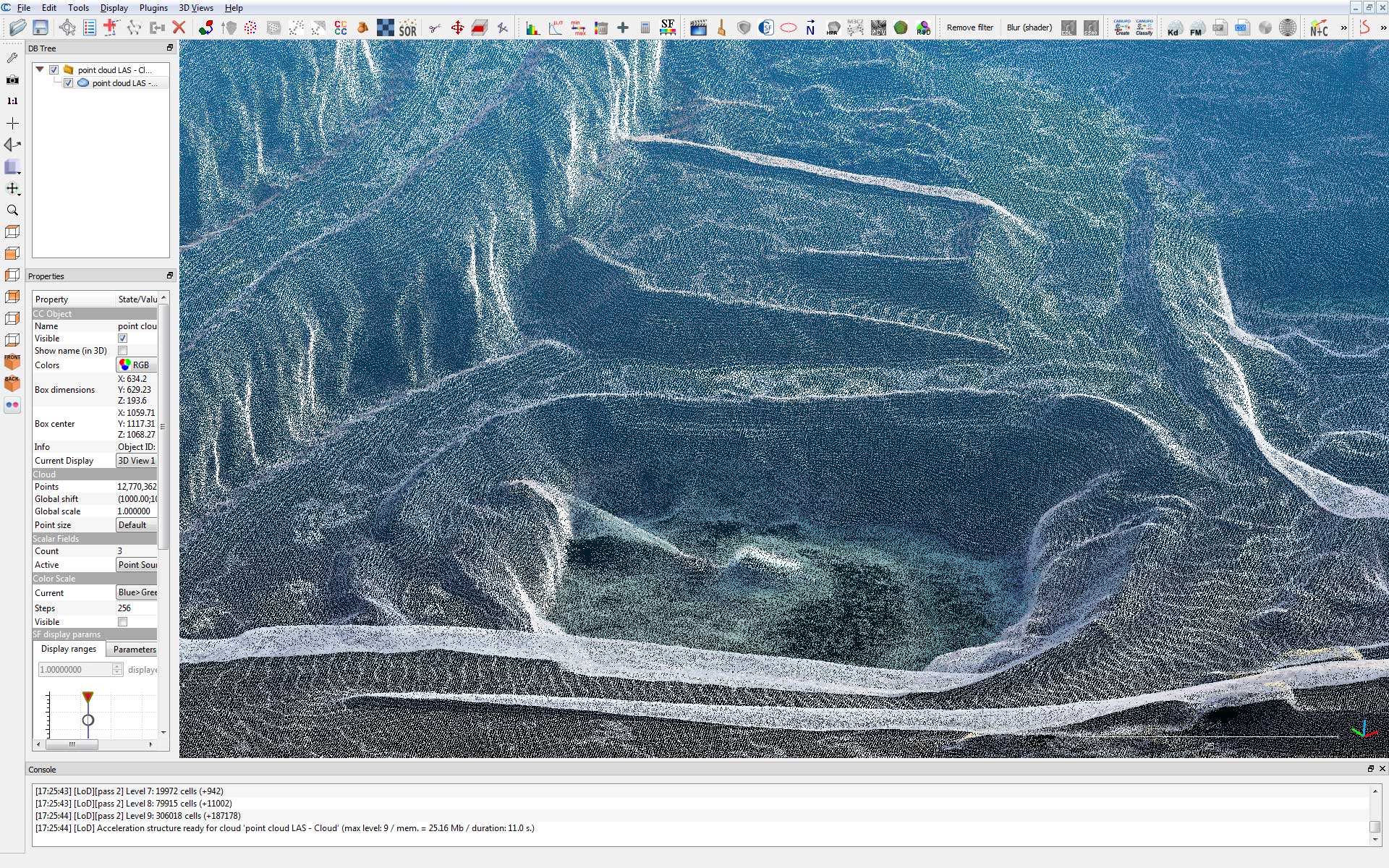 May 2017 saw PrecisionHawk launch a free service for processing images captured from drone mapping called PrecisionMapper. Taking advantage of the offer, the same 224 images MavicPro acquired imaged were uploaded. While there was considerable time involved in the transfer (approximately 1 Gig of images), the image processing was surprisingly fast with results comparable to those from Agisoft. PrecisionHawk also have an autonomous flight control app for the IPad (similar to DroneDeploy) called PrecisionFlight.  PrecisionFlight looks like a useful tool but the work flow that DroneDeploy uses is better. In PrecisionFlight, there is no easy way to set the front lap and side lap and see how the ground sampling distance is affected. Still alternative are always welcome 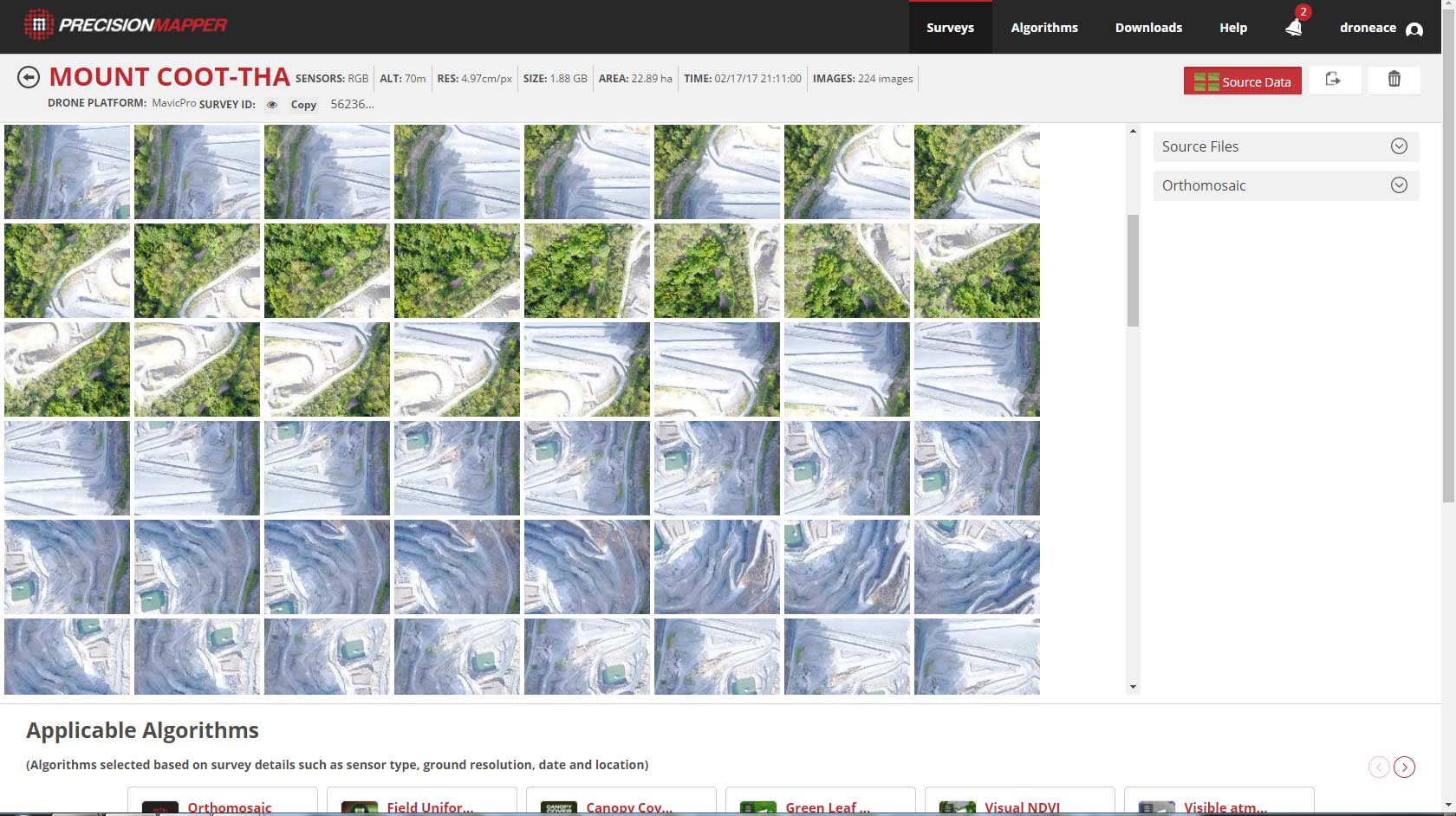 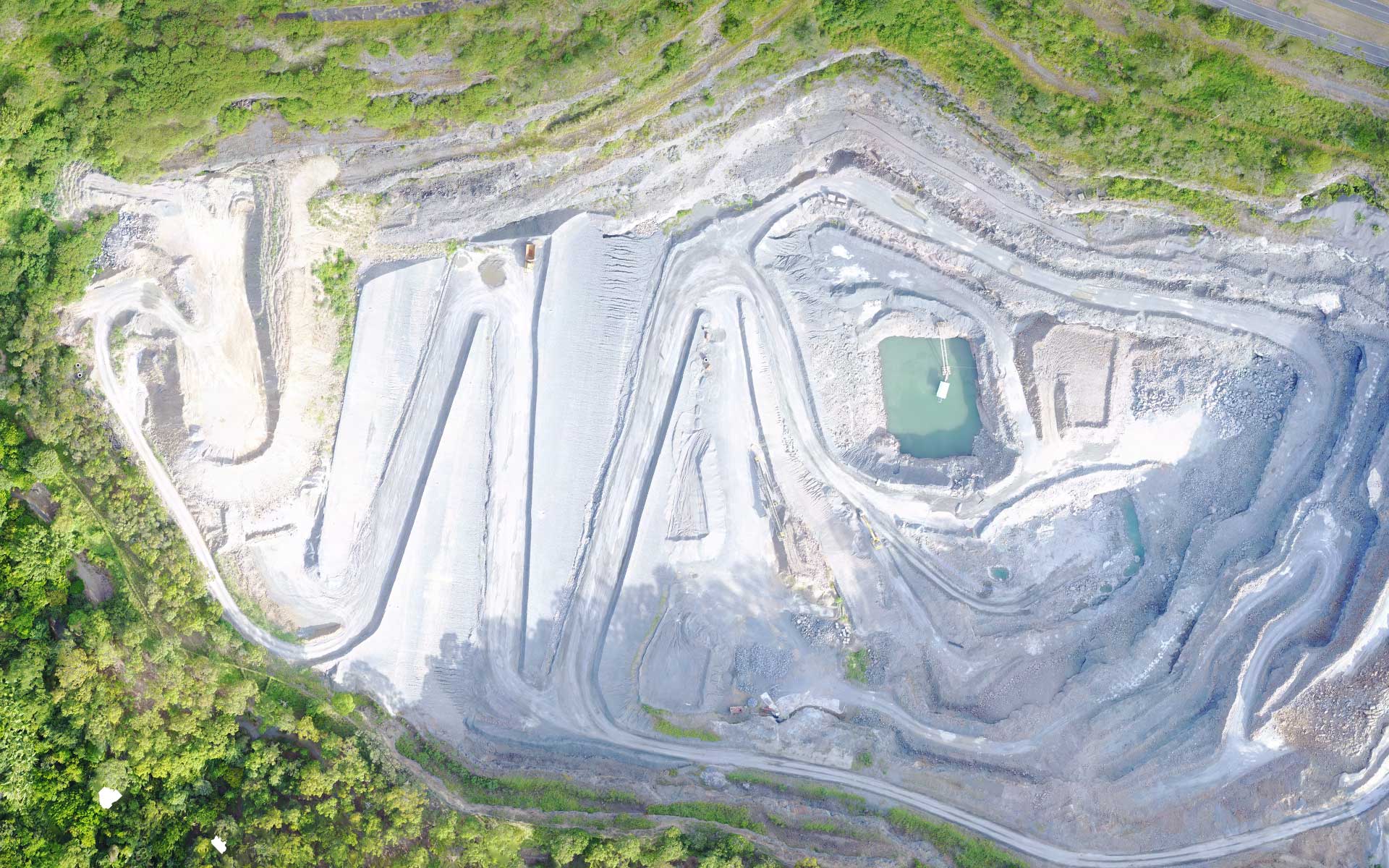 Consumer drones can be used to undertake 3D mapping of large and complex structures with high quality results, By further employing ground control points, we are confident “survey grade” results are achievable.

For those interested in learning drone mapping, we recommend to start small (map a small area first), start slow, start low (its easier to see and control the drone) and learn how to get repeatable results each mission. Practice in a safe and controlled area (ie not a local park full of people). Document all working drone settings (camera) to get repeatable and consistent results on following mapping missions.